The Boum-Percussion Ensemble is one of the most extraordinary of its kind nowadays.

The classically trained percussionists Kai Strobel, Marc Strobel, and Lorenz Behringer combine their educational background with elements of other cultures and a broad variety of music genres. Bridging gaps between the European orchestral percussion, Latin-American and Asian folk instruments adds another refreshing layer to their performance. The combination of these inﬂuences with conventional techniques and reimagining in a universal context forms the unique tonal language of „Boum“. The musicians draw their artistic approach from versatile sources. Valuable experiences based on engagements in the classical orchestra scene as well as solo work within the contemporary percussion scene have enriched their artistry. These include  Berliner Philharmonic Orchestra, the Berlin State Opera, the State Opera Stuttgart as well as the Orchestra of the National Theatre Mannheim and Solo concerts with the Symphonieorchester des Bayerischen Rundfunk (BR), the Lübeck Philharmonic, the Asko/Schönberg Orchestra in Amsterdam, the State Chapel Orchestra of St. Petersburg, the Musical Olympus Festival, participating in the Salzburger Festspiele and many more.

The Ensemble is very much involved in sharing their knowledge with the talented younger generation. In addition to multiple concerts for children, they teach within the frame of Musical Festivals in Italy, Austria, Croatia, Germany, Portugal, Cyprus and the Netherlands regularly. 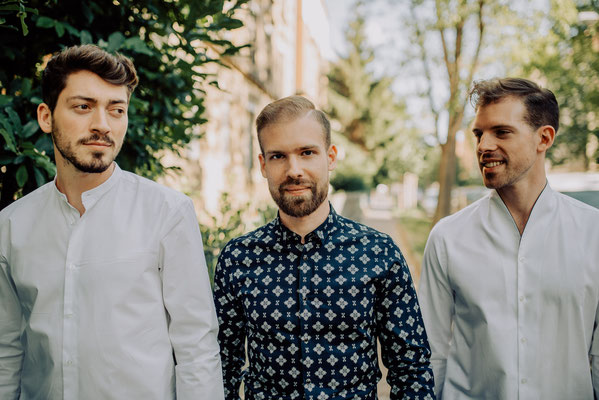 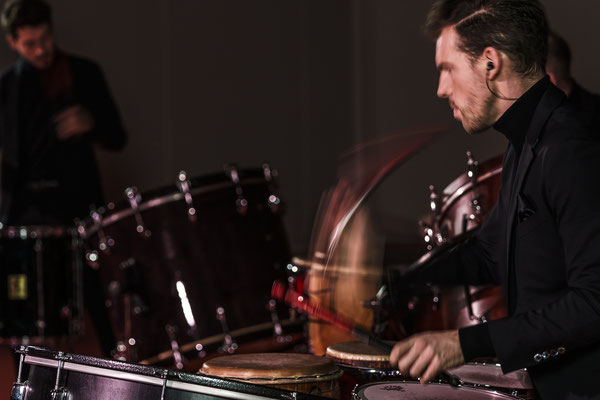 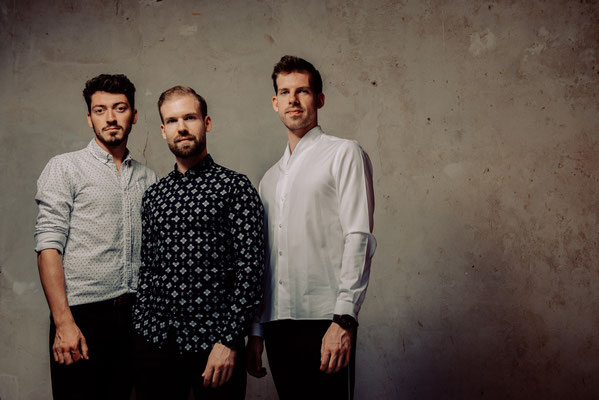 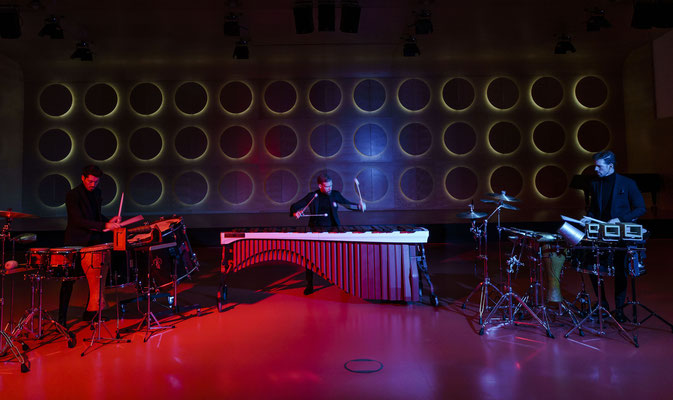 Boum-Percussion is also a platform where Kai & Marc Strobel and Lorenz Behringer present their indiviual music and arts projects. Collaborations with other art forms widen their working fields. 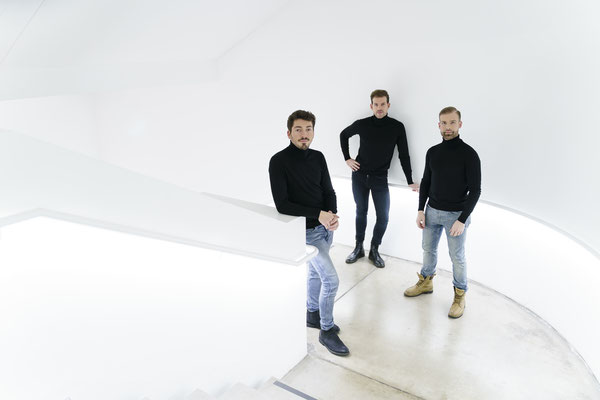 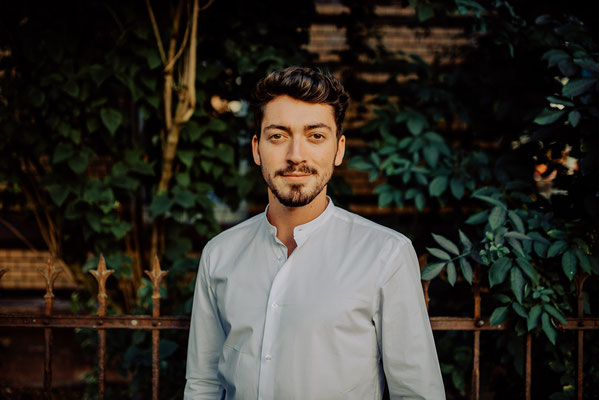 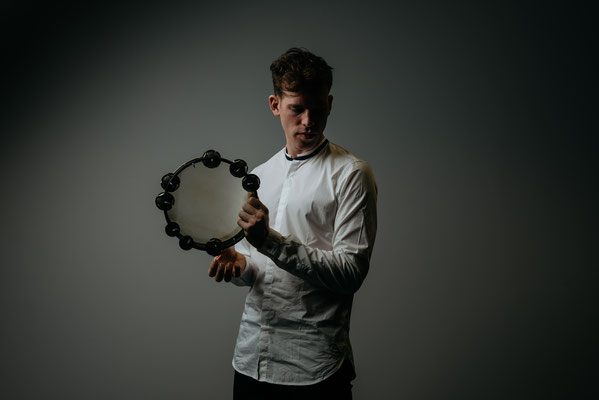 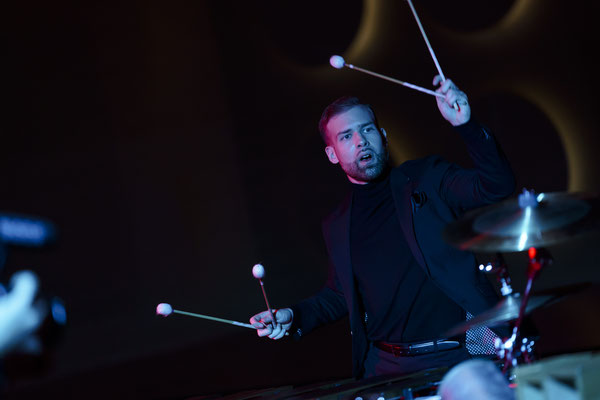 "We are all Percussionists!"

Three musicians, three views, same mindset!! In Cooperation with Theaterhaus Stuttgart, the Trio "Boum-Percussion" offers a rich programm for advanced percussion students, professionals and teachers. Learning from each other and being open for different approaches, Marc & Kai Strobel and Lorenz Behringer offer masterclasses in orchestral percussion, marimba/percussion-solo and timpani. Join talking rounds, play together, improve your techniques and practice methods, play and try outstanding instruments of our partners ADAMS, Thomann and ZULTAN-Cymbals and attend individual private lessons with all of the three lecturer. A final concert performance marks the end of the ACADEMY days, where participants can enjoy the stage. No matter what level or if marimba-soloist or orchestral audition performer. We are all percussionists!!

Join us to create a space of inspiration, joy and get in touch with percussionists from all around the globe!

COMPOSITION  |  CREATIVE DIRECTION
Percussion and Dance share timing, tempo and the right feeling for the intenional emotion. Boum-Percussion uses its versatile experience and musical sensitivity in creating balletmusic for choreographers and dancers. Besides common audiotapes, compositions can include exclusively a live-percussionist. A close working process between composer/musician and choreographer has the aim to connect all corresponding aspects of the piece perfectly, to paint a unique creation. 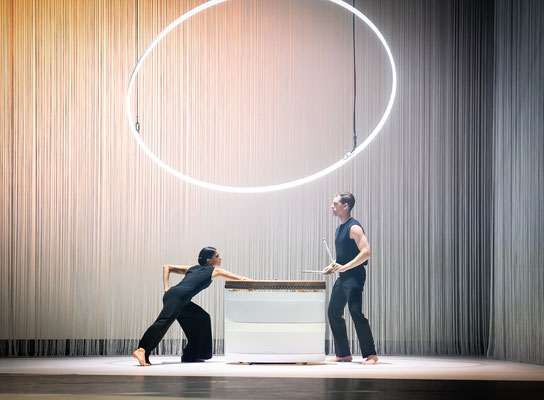