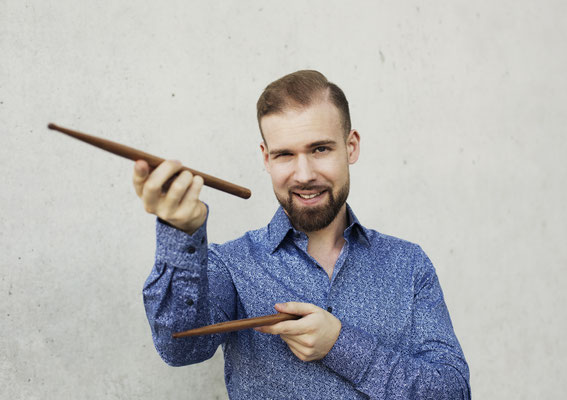 Kai Strobel, 1st place winner and recipient audience award of the "68th Int. ARD Music-Competition 2019" and winner of the 2018 TROMP Percussion Competition Eindhoven, ranks among the most promising percussionists of his generation.

He is a scholarship recipient of the Deutsche Stiftung Musikleben and the German Music Competition, and an Honoree of the Mozarteum International Summer Academy.

Since 2021 he got appointed International Visiting Tutor at the RNCM. As a lecturer and soloist, Kai Strobel regularly appears as guest at music festivals in France, Croatia, the Netherlands, Poland, the Czech Republic, Austria, Switzerland, Italy, Russia, USA, Portugal, Hungary and Germany.

Furthermore he established his own Percussion Academy for young Students in Stuttgart/ Germany, which will have its first turn in May 2021.

Kai received his first lessons from Marta Klimasara in Stuttgart. Since 2012, Kai Strobel has studied percussion at the Anton Bruckner Private University in Linz under Leonhard Schmidinger and Bogdan Bacanu.

In addition to his solo career, Kai Strobel is looking to explore and expand further the possibilities of using percussion instruments in his chamber music groups, such as the Boum-Percussion Ensemble and the PinedaBraussStrobel Trio, for which he also regularly writes arrangements. In doing so, he aims to broaden the percussion repertoire with works by great composers. Kai takes inspiration from their ideas as well as from the developments which instruments have undergone. His arrangements of works by Claude Debussy have already been published.